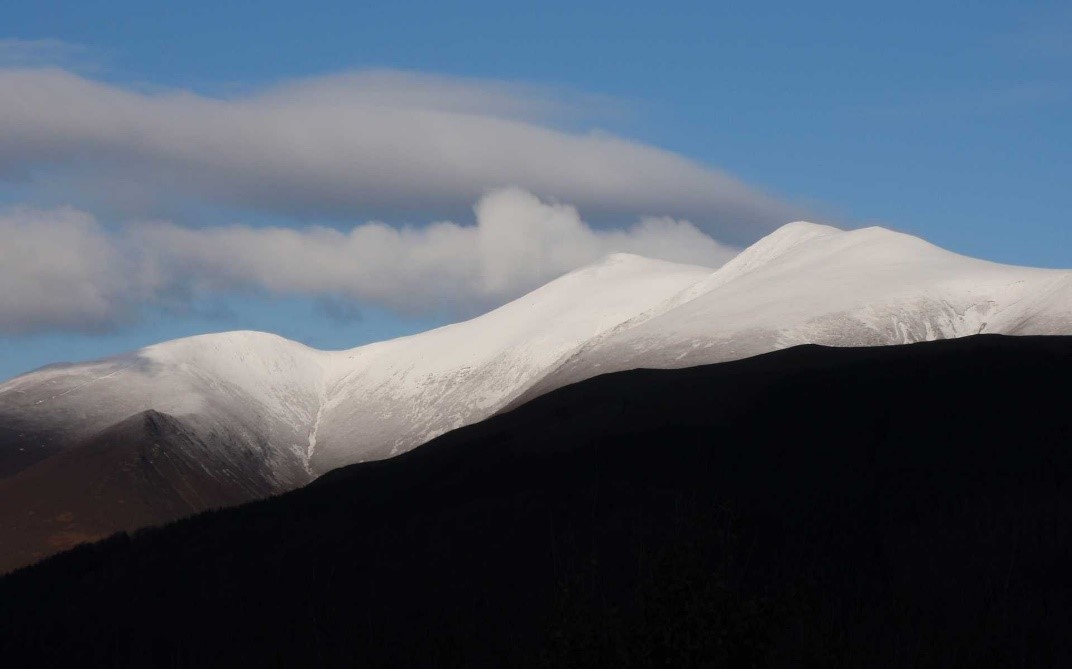 Typical Skiddaw Group topography on Skiddaw with smooth slopes predominating.  Without the hardening provided by contact metamorphism from the Skiddaw Granite this area would be flat as a tack!

Reading the comments of influential geologists of yesteryear about the Skiddaw Group you might wonder why anyone would take on the task of working on these rocks.  Rastall in 1910 said “The unravelling of the structure of the Skiddaw Slates would be a task of immense difficulty and would probably not repay the expenditure of the necessary time”.  The 2004 British Geological Survey memoir on the Skiddaw Group commented “Its [the Skiddaw Group’s] rocks have been generally regarded as among the most intractable in England …”  In the preface to the memoir the situation before the resurvey was summarized as “Previous attempts at geological interpretation had foundered largely because of a combination of intractable, homogeneous lithologies, sparse and localised macrofossil assemblages, and complex, polyphase deformation.  Various long-running geological controversies had been generated by the apparently paradoxical relationships shown in some places, while elsewhere the geological detail remained largely enigmatic.”  Even after the 1980s/1990s resurvey, comments of a similar vein persist as seen in the BGS Northern England Regional Geology publication “..[the Skiddaw Group’s] strata are challenging.  Lithological uniformity, complex structure, and a lack of distinctive stratigraphical ‘marker’ beds, combine to keep substantial parts of their outcrops enigmatic, with much detail currently unresolved”.  Despite this pessimism great advances in our knowledge of these most difficult rocks have been made mainly through the work of the British Geological Survey when a collection of fine field geologists was assembled to take on the Lake District; in management speak, a multidisciplinary approach.  The Skiddaw memoir [Cooper et al. 2004, British Geological Survey] is by far the best repository of our information about the geology of this unit.

By and large the Skiddaw areas are characterised by smooth rounded slopes whilst the Borrowdale volcanics widely, but not everywhere, produce rugged topography much loved by climbers.  This is quite a striking landscape contrast though when you are in the most-craggy parts of the Skiddaw area you might not believe the statement.  It is generally not appreciated that the Skiddaw Group should not make mountains and it only does so where large igneous intrusions have baked and hardened the rocks by contact metamorphism.  Basically the Skiddaw Group areas should be flat and uninteresting but in places like Skiddaw and Blencathra it is underlain by large granite bodies to harden vast volumes of rock.  We get glimpses of what it should be like in its unaltered state in the valley between Blencathra and Clough Head, and in the small Bampton inlier where topography is very subdued.  Inability to resist erosion is a function of many factors but, for the non-baked Skiddaw Group, the layering of slaty, silty, and sandy, rock types probably aids weathering leading to break down.  Fracture density and susceptibility to chemical weathering are other controls on producing recessive or resistant rocks.

The Skiddaw Group is found in a broad swathe in the Northern Fells between the Eycott and Borrowdale volcanic belts.  Small inliers in the Lake District have been mapped at Black Combe, Ravenglass, Furness, Bampton, and Ullswater.  Correlations have been made with similar rocks east of the Eden Valley.

As our oldest rocks the Skiddaw Group provides the first direct evidence for events in the Lake District but as is often the case some key information is missing and inferences have to be made.  We know the lower parts overlap and probably pre-date the amalgamation of Avalonia and the Lakesman-Leinster Terrane and their separation as a single entity from Gondwana.  Whilst the bulk of the group formed as the Avalonian Superterrane drifted through the Iapetus Ocean some of it relates to the rift, and possibly pre-rift, phases.  The Skiddaw Group is typically given the broad-brush descriptor of deep-water sedimentary rocks; deep water means different things depending on your experience.  If you specialize in inter-tidal sedimentation deep water may mean just sub-tidal but the term normally is taken to mean water depths greater than those found on continental shelves i.e. more than 200 m.  Being almost entirely turbidites and debris flows the Skiddaw Group is typical of a deep-water deposit and has a fossil content to match with the dominance of graptolites.  Some of the interpretations of the Skiddaw Group’s depositional environments include outer shelf for a minor component but the bulk of the succession was deposited in troughs bounded by major extensional faults.  In modern day passive margins these faults can have many kilometres of displacement and rarely up to as much as 10 km; a key point is that these movements develop during sedimentation so at no stage is there a fault scarp anywhere near the scale of the total offset [net slip].  Growth faulting of this inferred magnitude explains the contrasting stratigraphies seen either side of the Causey Pike Fault as well as the presence of a major slope-failure deposit.  Extensional faults active during continental rifting create basins that can be quite separate from adjacent basins hence contrasting successions.  Clearly these faults influence sedimentation but also they create fault scarps that can be unstable.  If these slopes fail, vast volumes of sediment can be mobilized as has been inferred for the Buttermere Formation.  We have a similar fairly-recent event off Norway that gives us an idea of the scale of these processes.  The Storegga Slide was created when the continental margin collapsed about 8,000 years ago sending 3,000 km3 of debris sliding into deeper water to cover 95,000 km2.  Tsunami deposits on the north coast of Scotland record the event and sonar imaging of the sea floor has documented the landslide scar and the chaotic nature of the debris when it came to rest.  In the rock record the product of such events is known as an olistostrome.  It is evident that submarine landsliding is an integral part of continental margin development.  Much of the sediment that fails will have been unconsolidated and will readily flow but more lithified parts can form blocks [olistoliths] that maintain their integrity.  In the Buttermere Formation the largest blocks are around a kilometre in size and, in present-day coordinates, the whole mass slumped towards the NW.

The Skiddaw Group stratigraphy has been established by detailed fieldwork combined with much input from palaeontologists.  Macrofossils are not common in the Skiddaw Group but graptolites in particular have made significant contributions to age determinations and correlation.  Microfossils have been crucial to the task of erecting the stratigraphic sequence and making correlations between isolated areas or fault-bounded blocks.  Acritarchs despite having uncertain biological affinities have proved to be the most useful of the microfossils; they have complex morphologies and define stratigraphic ranges.  They are thought to have algal affinities, probably the cysts of planktonic eukaryotic algae.  Studies have shown that the Skiddaw Group was deposited in a cold water faunal province as indicated by the low diversity but abundant graptolites.  Palaeomagnetic data show that during deposition of the group the Lake District was at a latitude of 60o S which corroborates the palaeontological information. 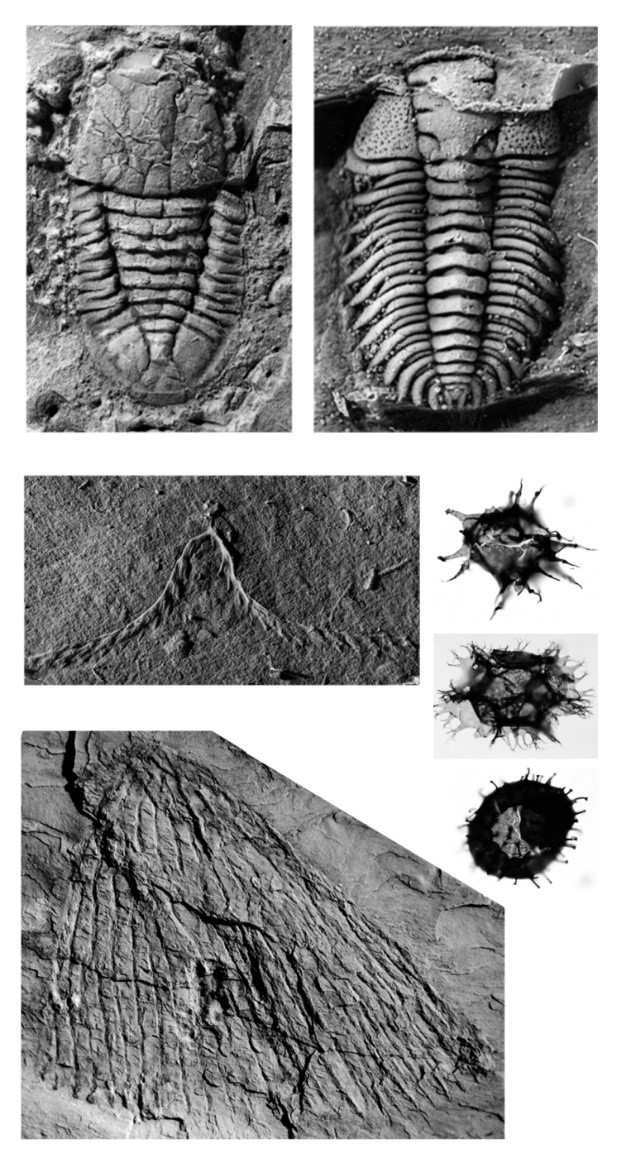 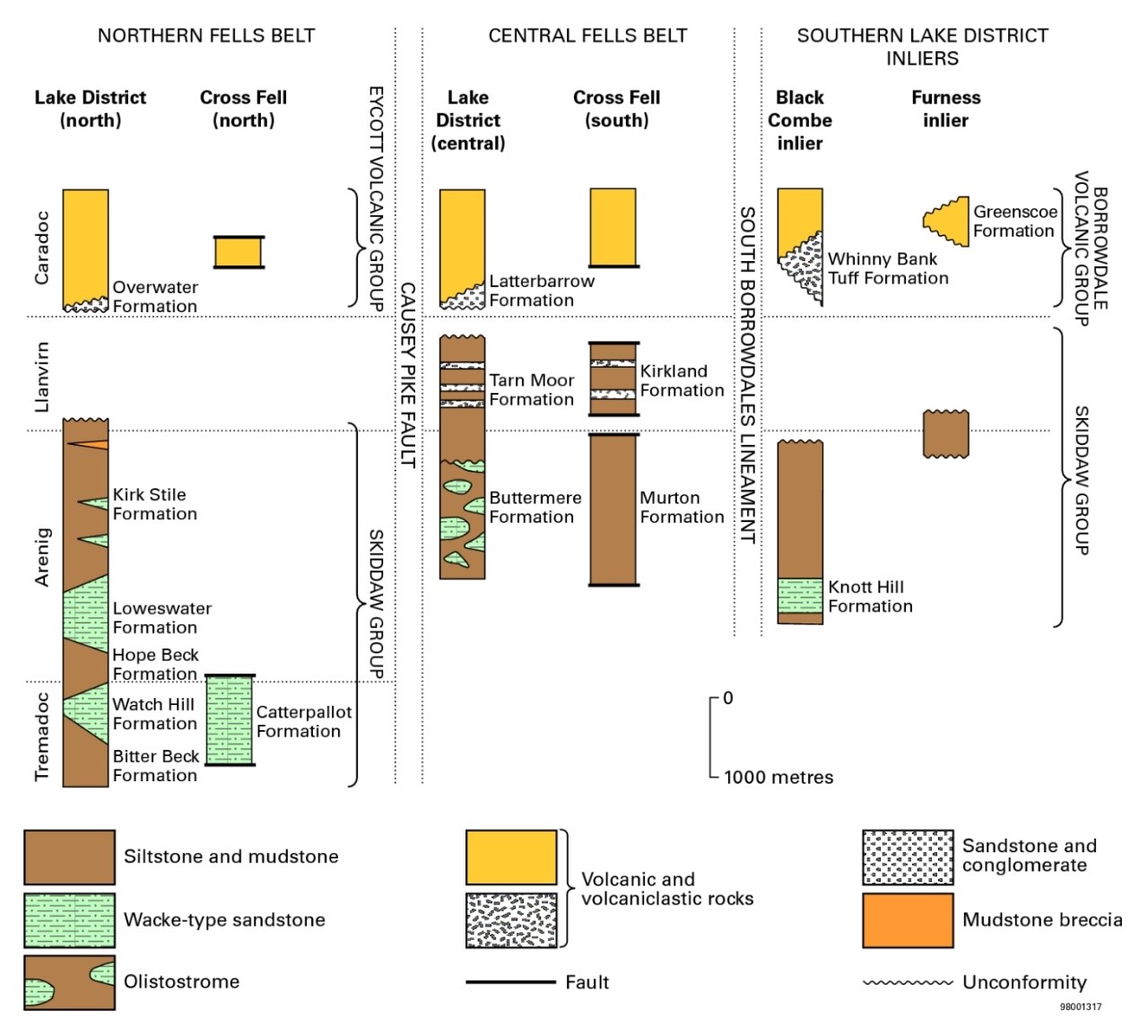 In terms of rock types the Skiddaw Group is a succession of around 5,000 m of muddy siltstones and sandstones [wackes] with very minor granule and pebble-grade beds.  Meta as a prefix should be attached to all sedimentary rock type names but this can be unwieldy so is omitted here; all original mudrocks are now slates showing their metamorphic state.  The domain north of the Causey Fault is not disturbed by the olistostrome and hence provides the best reference stratigraphic section.  Here predominantly muddy siltstone and mudstone deposition [Bitter Beck, Hope Beck, Kirk Stile formations] was interrupted by two major muddy sandstone incursions [Watch Hill & Loweswater formations].  There are traces of minor volcanic activity in the youngest Skiddaw Group rocks and we know that Snowdonia was active, along the northern edge of Avalonia, as a major volcanic province just before the Lake District.  An interesting development has been the application of detrital zircon geochronology to sandstones from the Watch Hill and Loweswater formations.  The distribution of zircon ages shows that the provenance of these units was the Amazonia craton in South America indicating a Ganderian affinity for the Lakesman-Leinster Terrane.  Above the Buttermere olistostrome there is a further 1000-1500 m of muddy siltstone and mudstone of the Tarn Moor Formation before the unconformity at the base of the volcanics. 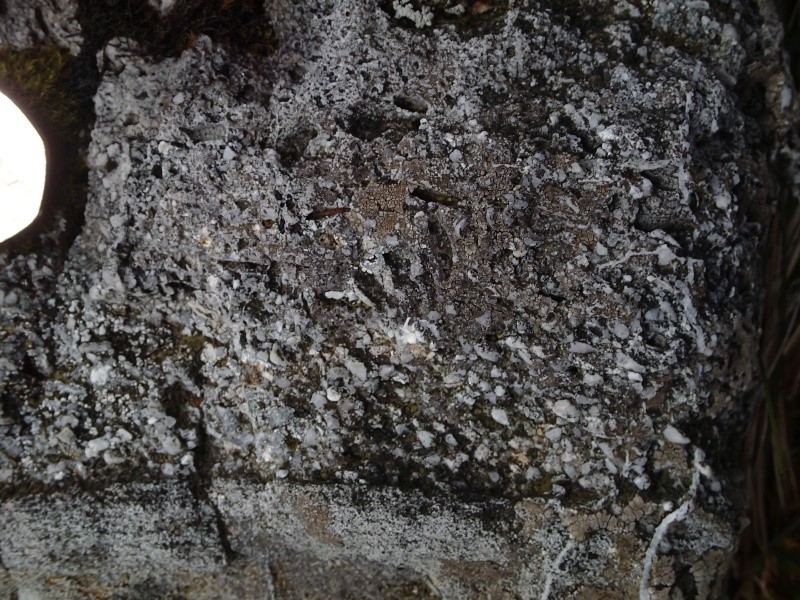 Skiddaw Group turbidite on the east slopes of Robinson, Buttermere Formation: grain-size grading from coarse sand to silt. The straight edge of the coin is 8 mm.

Small-scale examples of soft-sedimentary deformation are scattered throughout the Skiddaw Group but the Buttermere olistostrome is on a much grander scale.  The slumped mass has created a 1,500 m thick unit with olistoliths [blocks] up to a kilometre in size though most are 5-10 m.  Fossils in the olistoliths show that the source material ranged in age from mid-Tremadoc to mid-Arenig which means the landslide sampled most of the pre-existing Skiddaw Group stratigraphy.  Considerable internal deformation took place as the mass moved downslope in an unconsolidated to semi-consolidated state creating folds and faults on a variety of scales.  An idea of the scale of this slump mass can be gained by examining the valley sides above Buttermere and below Robinson-Goat Crag.  Clambering up the minor ridges between the Goat Gills shows, for most of the climb, gently-dipping but upside-down bedding in turbiditic wackes.  Many of the beds have Bouma sequence internal structures as well as grain-size grading providing an excellent way to monitor the inverted younging.  Tabc divisions coupled with cross-bedding truncations in Tc show very clearly the upside-down nature of the beds in most of the climb from the valley floor.  When the data are aggregated, they indicate a kilometric-scale recumbent fold the Loweswater Anticline which explains the scale of the inverted beds.  Because of the mobile nature of slumps various parts may have advanced at varying rates, or sticking on slide surfaces happened in different places, producing refolding of earlier folds resulting in considerable complexity.  The Acadian Orogeny superimposed a slaty cleavage over this assemblage of structures which were essentially all soft-sedimentary in nature.  Such complexity goes some to explaining why some researchers erroneously believed there was an orogenic event between the Skiddaw and Borrowdale Volcanic groups. 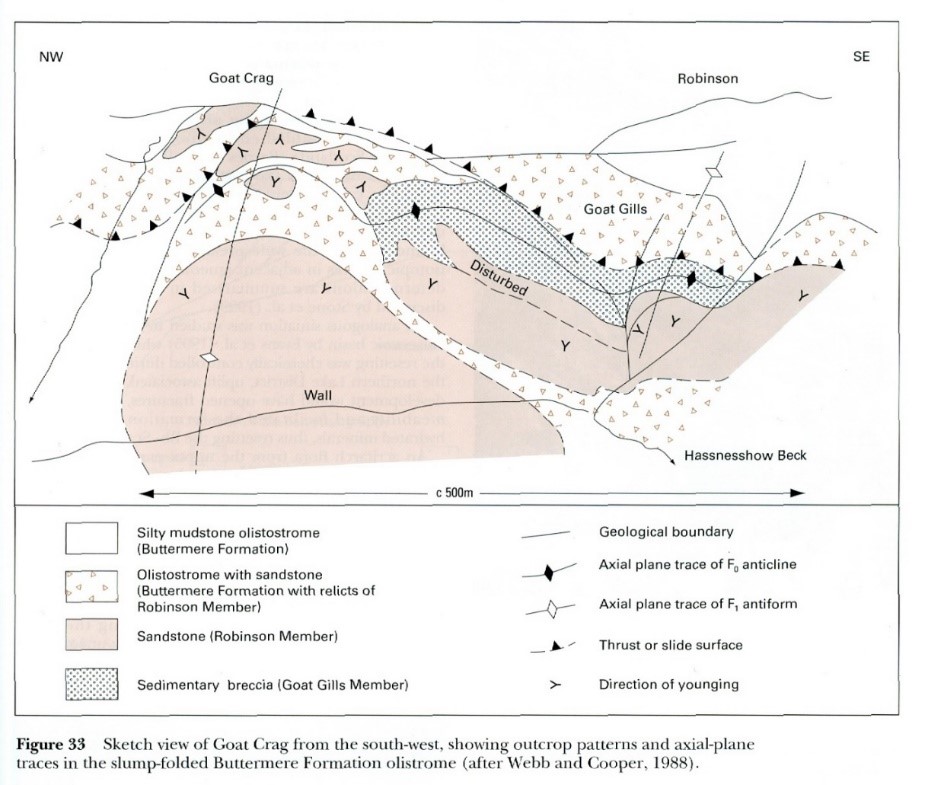 Sketch view of Goat Crags above Buttermere from the SW illustrating the slump-folded Buttermere Formation olistostrome.  From: Cooper, AH, et al. 2004 The Skiddaw Group of the English Lake District.  Memoir of the British Geological Survey. 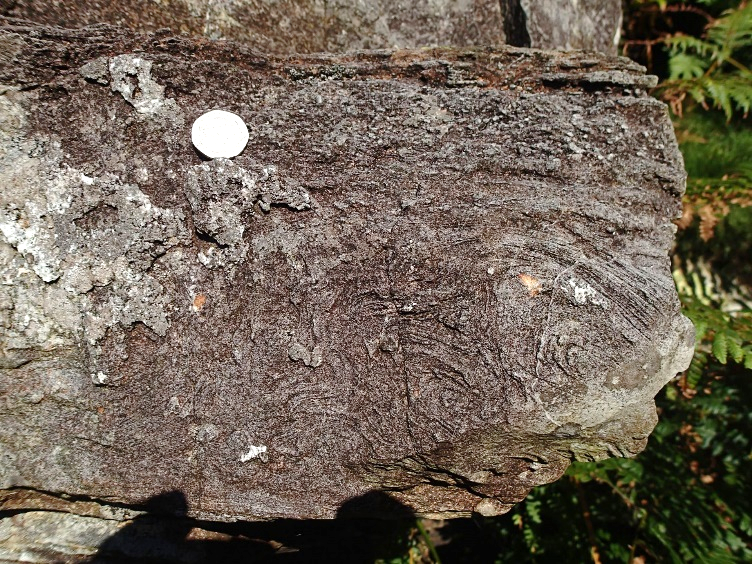 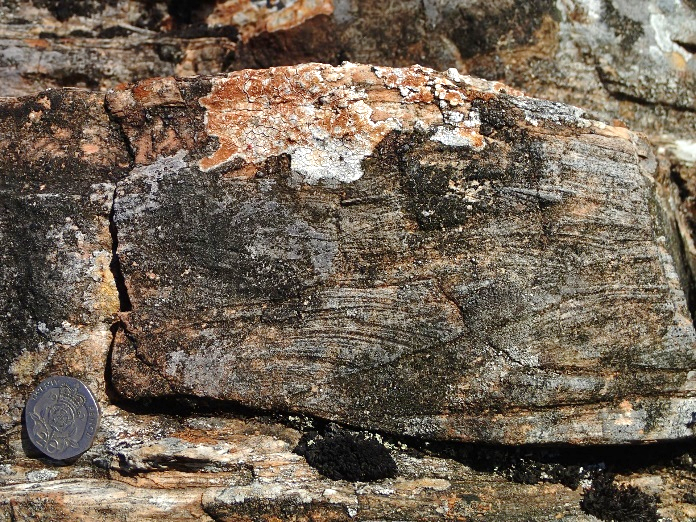 Skiddaw Group sedimentation was brought to an end by an enigmatic period of uplift that probably was driven by processes associated with the start of subduction, itself a poorly understood mechanism.  What we do know is that before the start of Borrowdale volcanic activity the deep marine Skiddaw Group had been uplifted such that the volcanics were deposited on a subaerial plane that was fairly smooth.

All these processes contribute to uplift which in the case of the Lake District converted the edge of Avalonia from a deep-water setting to one just above sea level.  We know this because after the uplift and before the main volcanic phase some thin sedimentary horizons [Overwater and Latterbarrow] preserve a record of river, intertidal, and possibly marine, conditions.