Continuing the approach of using major unconformities to structure the account, rather than geological periods, we now consider events immediately after the shutdown of volcanic activity in the Central Fells.  South Lakeland is dominated by the metasedimentary rocks of the Windermere Supergroup, an almost entirely marine sequence around eight kilometres thick, ranging in age from late in the Ordovician to the latest Silurian.  Here a broad swathe of country is underlain by a variety of sedimentary deposits with a tiny proportion of igneous rock.  Overall, this region is subdued in comparison to the rugged terrain of the Borrowdale volcanics and, though the contrast is usually stark, towards the Westmorland Borrowdale and Shap, it is less obvious. 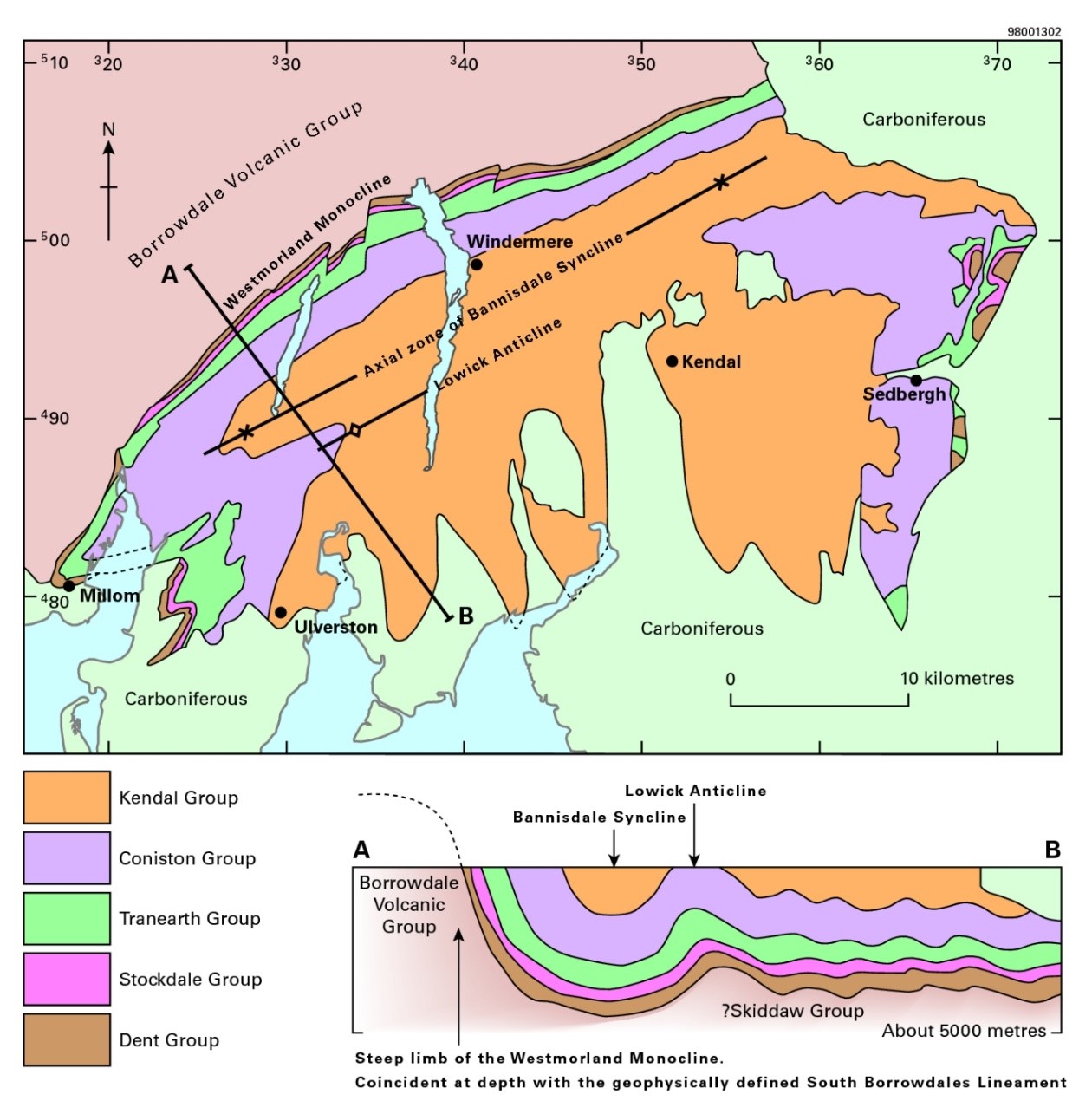 Thermally-controlled post-volcanic subsidence allowed the Borrowdale Volcanic Group to sink beneath the waves and to be planed off by a marine transgression.  We know that the whole Lake District became submerged because a small remnant of the oldest deposits is located at Drygill in the Caldbeck Fells.  A sequence of shelf sedimentary rocks, the Dent Group of Ordovician age, forms the basal part of the supergroup varying from near-shore deposits to outer shelf.  In such environments lateral changes are common and this has produced complex interdigitations of shelf type rocks.  Also, in these environments depositional gaps are common and this has led to correlation problems.  Initially the Dent Group stratigraphy was defined in the South Lakes area where there are many gaps in the rock record for this unit.  The group is more fully represented in the Dent area and this led to a major revision of the stratigraphic nomenclature in the early 1990s and the loss of some long-standing terms.  Most prominent was the abandonment of the name Coniston Limestone which not everyone has come to terms with.  In Dent Group times sedimentation of a mixed carbonate/clastic succession was influenced by storms starting with the Longsleddale Member, a 10-20 m sandy to conglomeratic unit that is derived from the underlying volcanics; it is so similar to the source material it can be frustrating to pin-point the boundary in the field.  Locally the base of the supergroup is the Stile End Member which is an assemblage of calcareous siltstone with nodular limestones, and a basal sandy facies.  Next is the Yarlside Volcanic Formation which outcrops in a 13 km belt from just east of Kentmere to Shap Wells though it is less than 200 m thick.  Interpretations of this minor igneous event have variously considered it to be a rhyolite lava flow or an ignimbrite though it possibly has elements of both; the BGS Lexicon of rock units describes it as “generally felsite but locally tuff and lapilli-tuff”.  The rest of the Dent Group is dominated by calcareous siltstones and mudstones with minor intercalations of siliciclastics and a very minor tuff horizons.

The thermal contraction of Lake District lithosphere following the Borrowdale/Eycott volcanic phase led to a slow and gradual deepening of water depths throughout the slow deposition of the Dent Group though a minor reversal was caused by a glacio-eustatic event late in the Ordovician.  Sedimentation was continuous across the Ordovician-Silurian boundary which is within the Stockdale Group and continuity is further reinforced by the sustained deepening trend into the Silurian.  The sedimentary basin in this phase was sediment-starved and anoxic, initially depositing the Skelgill Formation which is a pyritic and graptolitic black shale.  Sedimentation rates were exceptionally slow as the Skelgill accumulated 20-40 m of shale in around 10 myr.  The next unit is the Browgill Formation, which shows some oxygenation of bottom-waters, is mainly a green-grey siltstone with minor graptolitic black mudstone intervals.  Basin anoxia returned with the Tranearth Group a sequence of siltstones and fine-grained sandstones together with some more substantial turbidite sandstones.  Calcareous mudstone near the top of the group is regarded as a brief return to more oxygenated conditions rather than to a shallow-marine environment.  Sedimentation rates dramatically increased with the subsequent Coniston Group which is dominated by thick packets of turbiditic sandstones interbedded with lesser anoxic siltstones.  The exceptional increase in the sedimentation rate can be expressed in a variety of ways.  In the last two to three million years of the supergroup’s depositional history more than six kilometres of stratigraphy was laid down whereas a few tens of metres of the earlier Skelgill Formation took 10 myr.  These pronounced contrasts match the modelling of foreland basin development resulting from Scotland overriding Avalonia.  Another aspect of the tectonic setting worth emphasizing is that the eight kilometres of supergroup stratigraphy was deposited on continental lithosphere away from a plate margin.  We typically think of great piles of sedimentary rock as forming on thinned continental crust at a rifted continental margin but clearly we can do something comparable by loading the lithosphere.  In the final stages of the Windermere Supergroup the sedimentary basin filled up and water depths progressively decreased during Kendal Group deposition eventually reaching shallow-marine environments in its upper part.

Contrasting representations of Windermere Supergroup stratigraphy using time or thickness for the vertical axis; the last 10% of time taken to deposit the supergroup represents 80% of the thickness of the sedimentary pile. 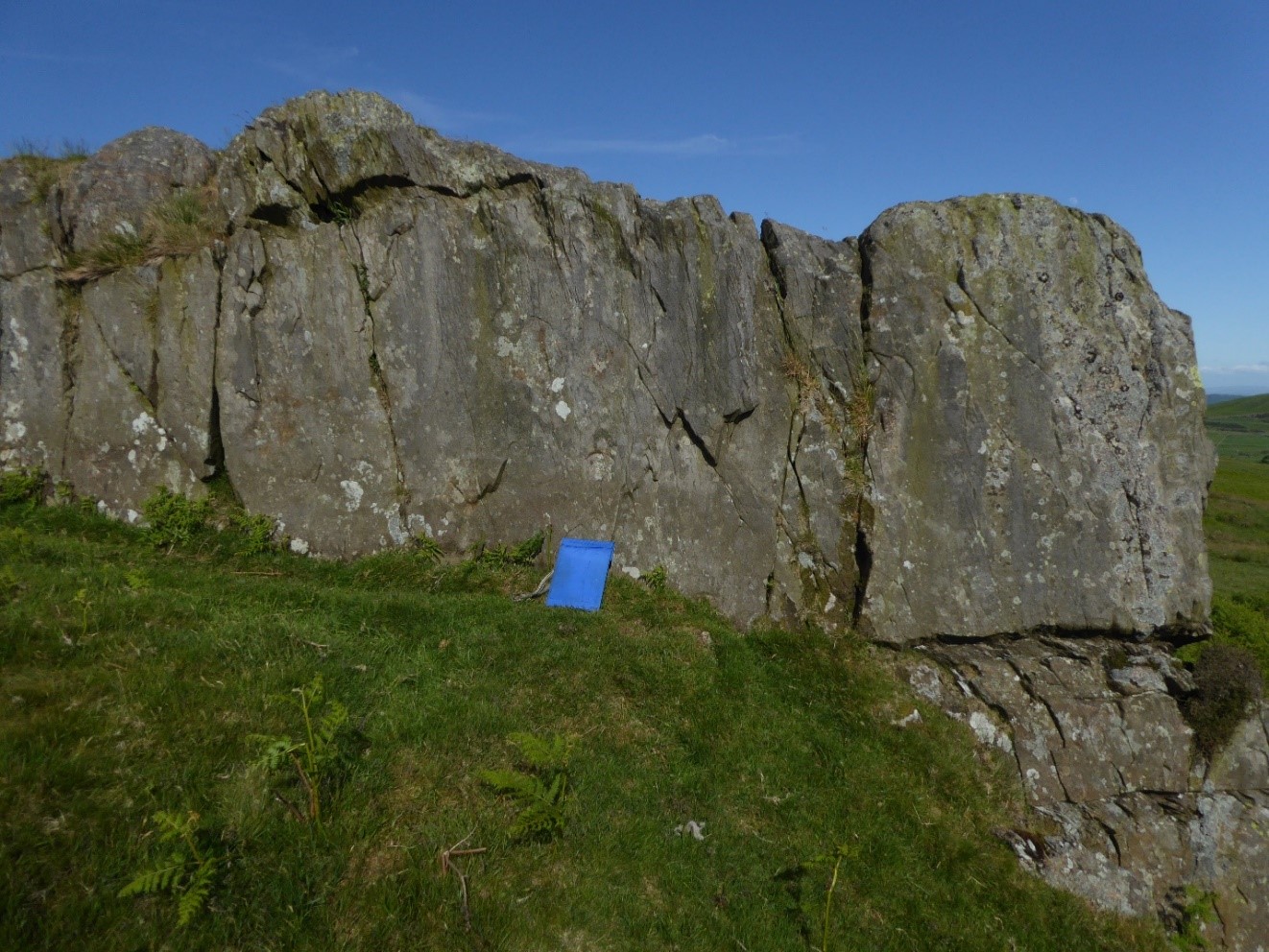 A 1.9 m thick turbidite bed from the Gawthwaite Formation in the Coniston Group on Gawthwaite Moor.  These beds typically display delayed grading in that laminated Tb and cross-laminated Tc turbidite subdivisions only occupy less than 10% of the bed thickness.

Hemipelagite is a term that is much used when describing the Silurian Windermere Supergroup deposits and the sequence has some excellent examples.  Hemipelagic sediment is a mixture of terrigenous grains [land derived silt and/or clay] and biogenic material; the typical example has more than 40% silt and more than 10% biogenic pelagic material primarily from organisms living in the water column.  This mixture is typically deposited in water depths equivalent to outer shelf and continental rises.  A variety of mechanisms have been suggested for the transport of the terrigenous component including in suspension from rivers, wind-blown, lofting at the distal end of a turbidity current, resuspension from shelves and shelf-edges by storms or other bottom currents, volcanic ashfall, and mid-water currents.  Volumetrically hemipelagites are important in the modern oceans because they accumulate at much faster rates than pure pelagic deposits and they form the background deposit type in many deep-water environments.  This was certainly the case in the Windermere Supergroup post Dent Group times.  Once the major turbidites began to be deposited, hemipelagites would be deposited in any lull in sand incursion such as in the Latrigg and Poolscar formations. 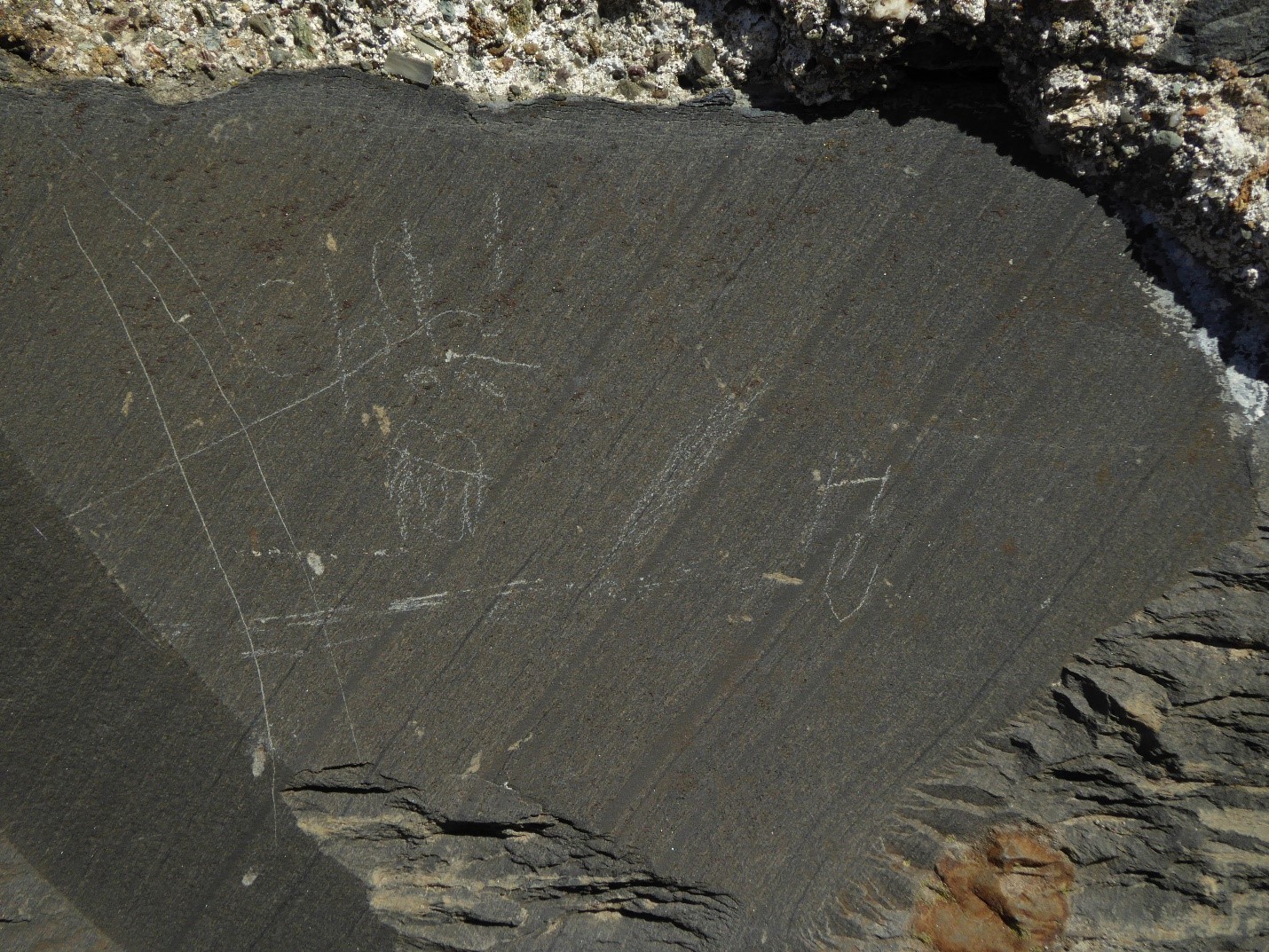 Brathay Formation, building stone Armitt Museum, Ambleside.  The prominent dark layers are about 4 mm thick and represent deposits from muddy turbidity currents.  The much thinner laminations are alternations, typically three per millimetre, of muddy siltstones and carbonaceous mudstone.  These pairings represent annual events the dark layers formed during summer blooms of organic productivity whereas the pale layers are the background sedimentation which become evident in winter.

Bentonites are a common but very minor component in parts of the Windermere Supergroup.  They are clay-rich layers, mostly only a few cm thick, formed from airfall ash deposits altered by interaction with sea water during diagenesis.  Most are from large rhyolitic eruptions and some are the distal dispersals of supereruptions which probably had short-lived impacts on global climate.  Because bentonite layers represent a single event they can be useful for correlation.  Some in the supergroup show evidence of having been resedimented.